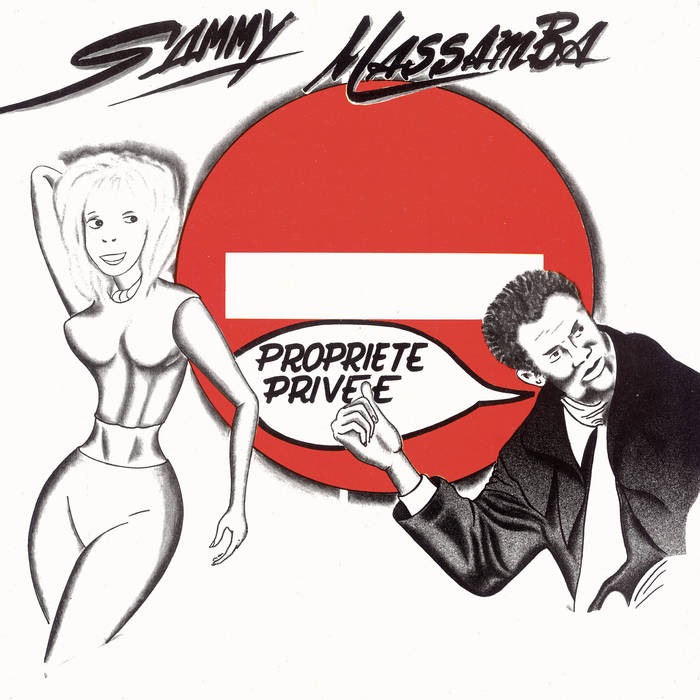 Propriété Privée is the pinnacle of Congolese musician Sammy Massamba’s style: a successful fusion of African and American music heritage, halfway between Franco and Otis Redding, Fela and Wilson Picket, King Sunny Ade and Aretha Franklin. Home made in Paris, self-released in 1987, with only 1000 copies hand distributed, the 4 tracks EP features the nastiest funk, boogie, soukous, rumba and electro pop soundclash the Eighties could offer. Carefully restored, remastered and repackaged in total respect with its original release. The vinyl lacquer reissue was even made by its original author, the legendary André ‘Dédé’ Perriat. Sammy Massamba’s life story is printed together with photos and liner notes on the inner sleeve of the 12". He still lives in France and is available for interviews, showcases, live shows and any sign of the gratitude he deserves.

There have been ups and downs in the long career of Congolese musician Sammy Massamba, but nothing as gruesome as what happened a certain Friday night of the year 1992 at Sammy’s Parisian house.

It all started with a mysterious phone call.  At the other end of the line, a voice with a strong Japanese accent introduced herself as the nephew of Akio Morito, the renowned cofounder of Sony.  His uncle was the man who invented the Walkman, the transistor television, and was running possibly the most powerful music corporation the world had to offer back then. The Japanese heir mentioned he was a fan of ‘Propriété Privée’, a record Sammy had produced himself, pressed in small quantity and barely distributed in 1987. He was in fact so keen on the record that he wanted to sign Sammy Massamba to Sony right away. He added that Prince himself had been influenced by the eponym track’s intro for one of his songs, and that there were potential judicial remedies that could help, amongst other things, to propulse Sammy Massamba to global stardom in no time. He was coming to Paris with his uncle this very monday, and wanted to meet straight away to sign a contract. Sammy Massamba had been a famous musician in Africa and the European diasporas for 2 decades at that time, however he had always kept a cold head towards the glitz and glamour of show business.  His wife on the opposite started getting massively excited by the prospect. The week-end passed, and Monday came. Sammy showed up at the meeting point, and waited for hours. Nobody came. A few days went by, without any news. Sammy ended up calling the Sony French office, and after a few unsuccessful attempts, the truth emerged:  Akio Morito’s nephew had died in a car accident in central Paris the day before the meeting was due. Sammy was stunned by the news, and spent the next three months on the verge of mental breakdown, unable to write music. He moved on,  with a long-lasting feeling  that his Propriété Privée album, which had been so painful to release, was cursed.

The story continues. The record keeps circulating in France, Italy, Germany and Spain thanks to people making bootleg cassettes. A decade later, youtube arrives. Somebody uploads the album, cementing cult status amongst djs and African music lovers. In 2015, Fred Martin, manager of label / blog Les Mains Noires, meet Sammy Massamba at his home. Sammy has found a full box of mint Propriété Privée vinyl copies, and Fred offers to sell them to his network of buyers for a good price. They sell out in a few days and a new generation of DJs start spreading the gospel.

Which brings me to the time I discovered this music. In 2016, invited by the Ethnographic Museum of Geneva, Switzerland to DJ at an exhibition opening, I decide to keep the party going and hit the Gravière club around 3am, where local DJ Jean Toussaint is hosting a vinyl party with the acclaimed German DJ Hans ‘Nomad’ as a guest. When I enter the club those 2 killer DJs are playing back to back a heavy selection of soukous and afro funk. Jean drops the Propriété Privée tune and the sky falls on me. I rush to the booth, asking him what the hell that was. He generously tells me, and I spend the rest of the night obsessing about it. Come back to the hotel at 6am, go online as soon as I hit my room. A copy of the record is for sale on Discogs, its expensive but a no brainer for a 6am inebriated vinyl junkie. When I receive the vinyl a few days after, the reward outlast my expectations: there’s not one but three killer tracks on this 4 songs EP. A deep soukous cut (Mizele Ngue, the second version Sammy has recorded of this great tune) and a slow electrofunk burner called Sala Keba. What a treasure to behold…

Propriété Privée is the pinnacle of Sammy Massamba’s style, a successful fusion of African and American music heritage, halfway between Franco and Otis Redding, Fela and Wilson Picket, King Sunny Ade and Aretha Franklin.  A one man band army, exploding with charisma and adventure. I am very grateful to present it today in a carefully restored and remastered format, and would like to thank Sammy for his trust,  my team and the numerous friends who helped along the way. Let’s hope the curse on the record is ancient history, I have a meeting in Central Paris soon...